The last thing Horizon executive assistant Grace Gonzalez remembers before being intubated and put in a medically induced coma for COVID-19 complications was sending last-minute texts to her husband, Francisco Garcia.
“I love you,” she typed as she struggled to take in enough air to even speak her own name.
“Take care of our daughter.”
That was Feb. 25, 2021 – painfully, just a few weeks before Gonzalez would have been eligible to receive her first dose of COVID-19 vaccine.
When she began to wake up, she could just make out a note written by a nurse on the whiteboard in her hospital room: “Happy Easter.”
She had been gone for six weeks.

Gonzalez just before being intubated in February 2021, and standing up again for the first time in June.

“At first, I couldn’t move or speak,” Gonzalez recalled, speaking by phone from her Chicago-area home. “I was completely paralyzed except for my eyes, either due to the paralytics they give you while intubated or as a result of nerve damage from the COVID itself – the doctors aren’t sure. And because I was intubated, I had no way to communicate or ask for help.”
She began running through the alphabet in her head, doing simple math problems and challenging her herself to remember birthdays, to see if her brain function and memory were still intact.
“For a while, I couldn’t figure out what had happened to me. I thought maybe I’d had a stroke,” she said. “Eventually, my husband started asking me to blink once for yes and twice for no to simple questions. Even that was frustrating – my brain had started working again, but I was trapped in my own body.”
Slowly, she regained the ability to move and speak, one finger at a time, one word at a time. In May, a month after waking up, she was discharged from the hospital, using a wheelchair, to continue her recovery at a rehabilitation facility.
“I know the statistics for getting out of the hospital after being intubated for COVID pneumonia – they’re not good,” she said. “I’m basically a miracle to be talking to you today. But it’s been quite the road.”
She was finally able to go home on June 4. But even then, she was only able to be out of her bed for about seven minutes in a 24-hour period. Over the summer came the small milestones – walking with a walker, then with a cane, along with therapy to continue relearning how to speak and swallow. She didn’t drive again until October and just ditched the cane this past April. 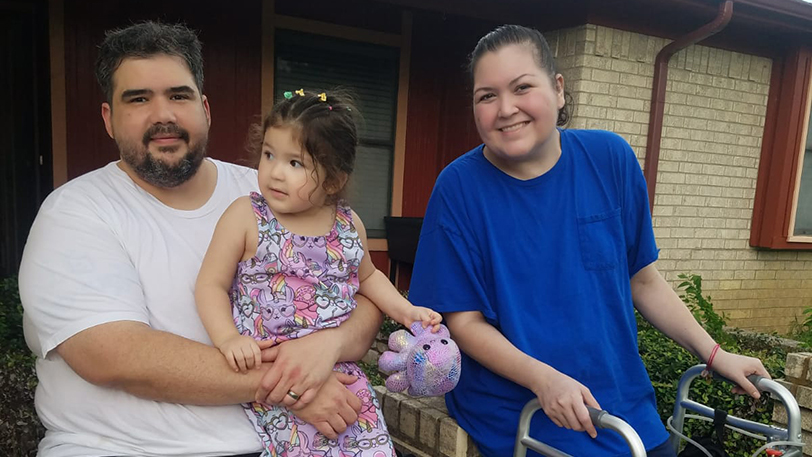 “At one point, I was practicing the word ‘hello’ over and over,” she said. “It’s like starting from scratch. But all the effort has been worth it, to see my husband and my daughter, Luzia, again – to say ‘Te amo' to my mom. I feel like I’m living on bonus time. When you’ve had independence taken from you and then restored, it gives you so much gratitude.”
There’s something else she’s thankful for. Through it all, Horizon – her employer of six years – has stood behind and beside her.
“From the notes and flowers from co-workers that I was finally able to look at when people would hold them up for me, to Horizon sending food to my husband and daughter, everyone has been so supportive,” Gonzalez said. “I was told not to worry about anything and just to focus on recovering.”
Megan McGhee, analyst, benefits and wellness, checked in regularly with Garcia over those arduous months to make sure the details of Gonzalez’s insurance and medical leave were taken care of. When Gonzalez was cleared to return to work last December, her team held a welcome-back luncheon for her at the U.S. headquarters in Deerfield, Ill., and gave her flexibility to work remotely as she’s able, telling her to do only what she feels capable of doing. 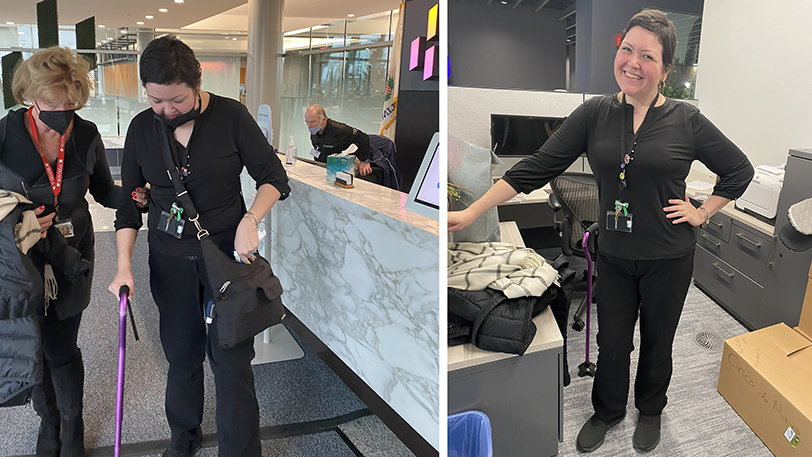 Returning to the office in Deerfield in December, 10 months after she first contracted COVID-19.

Some days are easier than others. While Gonzalez has come a long way, she’s still dealing with the after-effects of COVID. She has lingering fatigue and pain in her legs. One lung doesn’t expand as it should, and she can’t raise one of her feet, although leg braces help her retain her mobility.
“Horizon has stood by me at one of the worst moments of my health,” Gonzalez said. “They were willing to wait for me and gave me space to restart my life. How could I not be here for them?”
And for others going through health battles of their own. As an executive assistant in market access, Gonzalez is close to the patient experience and has gained new empathy and compassion for what  patients treated with Horizon medicines are facing across a spectrum of difficult diseases.
“It’s especially meaningful to work for a company like Horizon, helping other patients to restart their lives,” she said. “Before this whole experience, I enjoyed hearing patient journey stories. But now, I’m so much more appreciative of what we get to do in the lives of these patients. We give them back dignity and independence. We give them purpose. I know what that feels like, and I have so much respect for each person we get to serve.” 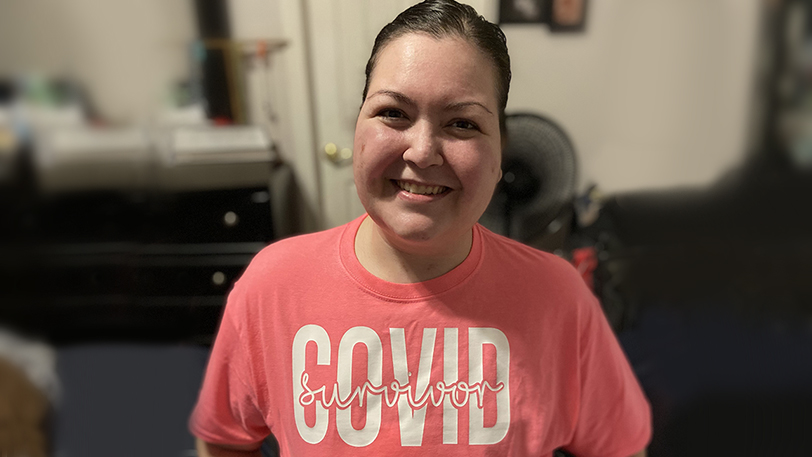 She acknowledges she may never get back to where she was physically before COVID.
“When my doctors would ask me what my rehab goals were, I’d tell them I want to get back to 100%,” she said. “But now my thought is, ‘I’ll take whatever percent I can get.’"
“COVID isn’t over. There are so many unknowns, and many patients are still battling long-term effects. For me, I’m happy to be alive, to be with my husband, who fought for me every step, to be able to watch Luzia grow up. You don’t take anything for granted.” 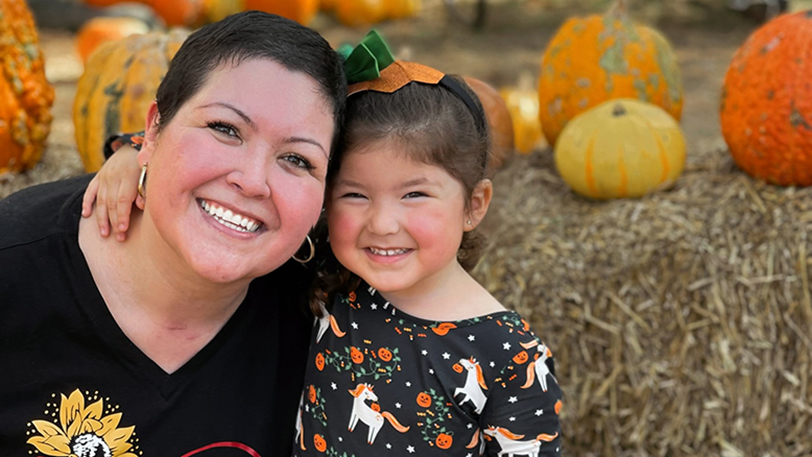